Stained glass Windows of the Zodiac

This stunning set of Zodiac stained glass panels is the original creation of Dr. Douglas Baker, the astrologer’s teacher, in the late 1960s. After requesting ideas of several artists he chose one set of designs and a famous stained glass studio in London created them. In Dr. Baker’s own words: “(this) set of stained glass windows, which are built of the same glass that is used in Westminster Abbey, has certain colors and these colors are related to the particular signs of the Zodiac. These colors are blended with the Rays and they will tend to produce color conditions in meditation rooms which will simulate as it were, the attraction of certain devas…”

He believed that when the windows came together, they created a mandala – a mandala which incorporated everything in the Universe since indeed they incorporate all 7 Rays and all Signs and Planets of the Zodiac.

His dream was to create a “Temple of Jupiter,” in which the windows would factor as the main energetic component and in which major Wisdom Tradition teachings would be carried out.

Unfortunately, he died in 2011, before that dream could be carried out. In my creation of the mandala logo, I have named it, “The Rose Window,” after the magnificent windows in the churches of Europe especially. 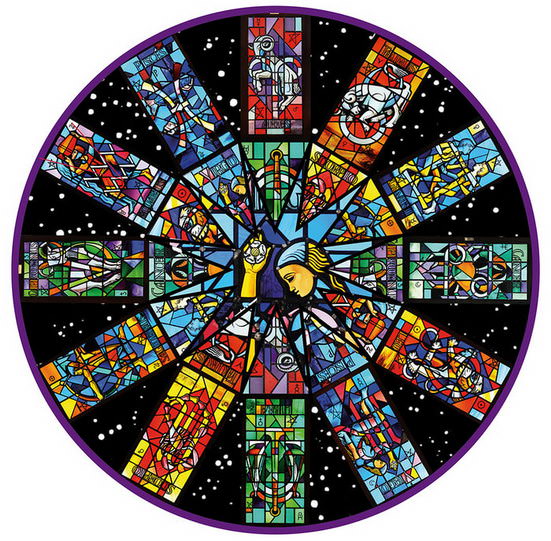 Besides incorporating Ray and Sign colors and the LifeForms typically associated with each Sign, these panels also show the exoteric (traditional) planetary rulers and the Esoteric planetary rulers. They are truly unique in the world.

After years of safekeeping, in 2015 display stands have been created for the panels so that they can safely be put on display. These stands were lovingly created by a member of the sacred Taos Pueblo, which is over 1,000 years old and lends its own ancient energy to the community of Taos, NM. The panels are now being offered for display to museums around the country.