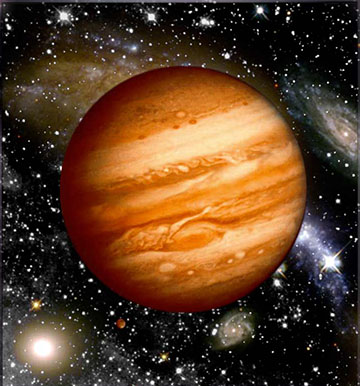 Question: “What do we do with the others?” Answer: “There are no others.” Ramana Maharshi

Jupiter, our largest, most benevolent and lucky planet began a new cycle in May, but this month it’s thinking twice about it. Typically, Jupiter sits in a sign for a year before moving on to the next sign, thus taking 12 years to make a full round of the zodiac. Every year it also retrogrades for about four months, a month later each year. Depending upon when in each sign it retrogrades it is possible that it can shift back into the sign it just left. Such is this year. It’s a little more interesting than usual however, because of the signs which represent the End and the Beginning. For the past year Jupiter was in the sign of Pisces, the last sign of the zodiac. Pisces represents the end of a cycle, a time for reflection, pondering and preparation for a new cycle. Jupiter in Pisces can also mean conspiracies, crime, subterfuge, big secrets.

In May, Jupiter shifted into the sign of Aries, the first sign of the zodiac, the beginning of a new cycle. This is a time for starting over, creating a new way of being and thinking. It is also a time for exposure, bringing things into the light of day, giving us the ability to trace things to their origins. But this month it retrogrades until November, at first still in Aries, then in October traveling back into Pisces. Jupiter retrograde in Aries can be about the perceived need to create a Noah’s Ark, to escape. Jupiter retrograde in Pisces is a symbol of discipleship, committing to something, some teaching greater than oneself. All of this seems so appropriate for the current shift of the Ages themselves. This is like a last gasp from the Age of Pisces for the old teachings, the old dogma while the Age of Aquarius is about the need for thinking and believing in new ways, as if we really did all come from the same Source and we really can all work together. Now that’s a dance worth dancing!

Dynamic: A lot of shifting energies this month.

Direction: Be willing to dance!

Soul Thought: Which will it be?

Direction: The focus could be on the big picture.

Dynamic: Lots of changes can mean lots of confusion

Direction: But actually, the way is clear . . . visually!

Soul Thought: And in other ways?

Dynamic: You may reflect that which is around you more than ever.

Soul Thought: When to reflect and when to shine?

Dynamic: Rarely has the air, the view been so clear.

Direction: You can overlook the seeming faults of others.

Soul Thought: “And still, after all this time the Sun never says to the Earth, ‘You owe me.’ Look what happens with a love like that. It lights the whole sky.” Hafez

Dynamic: Communication may break down.

Direction: Family is the key.

Dynamic: That chronic condition might have lightened up recently.

Direction: Just say it has.

Soul Thought: “Words can Change your Brain.” Title of Book

Dynamic: It really is a cosmic dance.

Soul Thought: What does it mean to start a new cycle?

Direction: Now is the time to act.

Soul Thought: “They always say time changes things, but you actually have to change them yourself.” Andy Warhol

Dynamic: That potentially explosive situation should resolve by mid-month.

Soul Thought: What’s worth arguing over?

Dynamic: Things should be feeling lighter.

Soul Thought: From the deepest depths to the highest peaks.