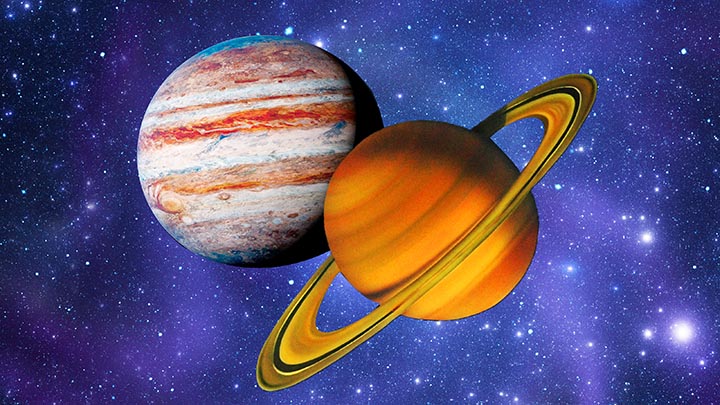 “The distance between this world and the other is exactly the width of a maple leaf.” Seneca Prophet, Handsome Lake

On December 21, the shortest day of the year and the first day of winter in the northern hemisphere, of summer in the southern hemisphere, the two largest planets in our solar system, Jupiter and Saturn, come together in the most intimate meeting between them since the year 1623. This level of closeness won’t be matched again until the year 2080. They will literally be only 0.1 degree apart. Considering the size of our universe and the size of those planets, that’s pretty close! These are two of our slowest moving – furthest out there – planets, which means that whatever they do affects us all as a planetary species. Both are already visible in our south by southwest skies at sunset.

This has been an unusual year from the start. Although we always begin our year with the Sun, Mercury and Vulcan in the sign of Capricorn, this January we had six planets in Capricorn, the sign of initiation and long-term karma. Three of them, including Jupiter and Saturn continued in that sign throughout the year which provides some explanation for the kind of year we had. This rough period of potential growth is the launching pad for sending humanity into the Age of Aquarius. Jupiter rules the sign of Aquarius. Just two days before this momentous conjunction, both planets will at last shift into the sign of Aquarius, the sign of all humanity, of joy and abundance, of coming together in groups to work toward unity, to bring a sense of brotherhood and sisterhood to the planet. These two planets together in this sign literally translate to, “Group Initiation.” We’ve had our preparatory period; now it’s time to make good on it. This IS the Age we must consciously choose to work together.

Everyone: As you watch our two giant planets come together, feel the sense of unity and destiny this conjunction can mean.

Dynamic: It’s time to launch into a new chapter of your life.

Direction: Put your wings on.

Dynamic: It’s a turning point in the world and you are at the center of it all.

Direction: Consider it a spiral rather than a circle.

Soul Thought: From dust to dust.

Dynamic: The time for education and brilliant ideas is now.

Direction: You can be part of moving us all forward.

Soul Thought: “The problem and the solution occupy the same space.” Seth

Dynamic: The urge to spend may need to be reined in.

Soul Thought: How to decide?

Dynamic: At this time of humanity’s evolution, your service is needed more than ever.

Direction: Serve: who you’re with, where you are, through what you’re doing.

Soul Thought: Loving is one way.

Dynamic: It’s been a long year, but now you can see the bigger picture.

Direction: Take a deep breath as you gaze.

Soul Thought: The pause that refreshes.

Dynamic: You are still on the battleground, but do you understand the battle?

Soul Thought: “The world is a mirror of what we have become within.” Gregg Braden

Dynamic: You may undergo a financial irregularity.

Direction: Define your security in ways other than finances.

Soul Thought: What exactly do you value?

Dynamic: It’s the culmination of an important period in your life.

Direction: Pour forth for others all that you have learned.

Soul Thought: That was then, this is now.

Dynamic: The first half of the month you may feel like a fish on a hook.

Direction: Lie low and quiet and they may never know they had you.

Soul Thought: When fear turns into an ally.

Direction: Be prepared to jump.

Dynamic: You’re the holdout and it’s not easy.

Direction: Someone has to hold the door open so that all may pass through.