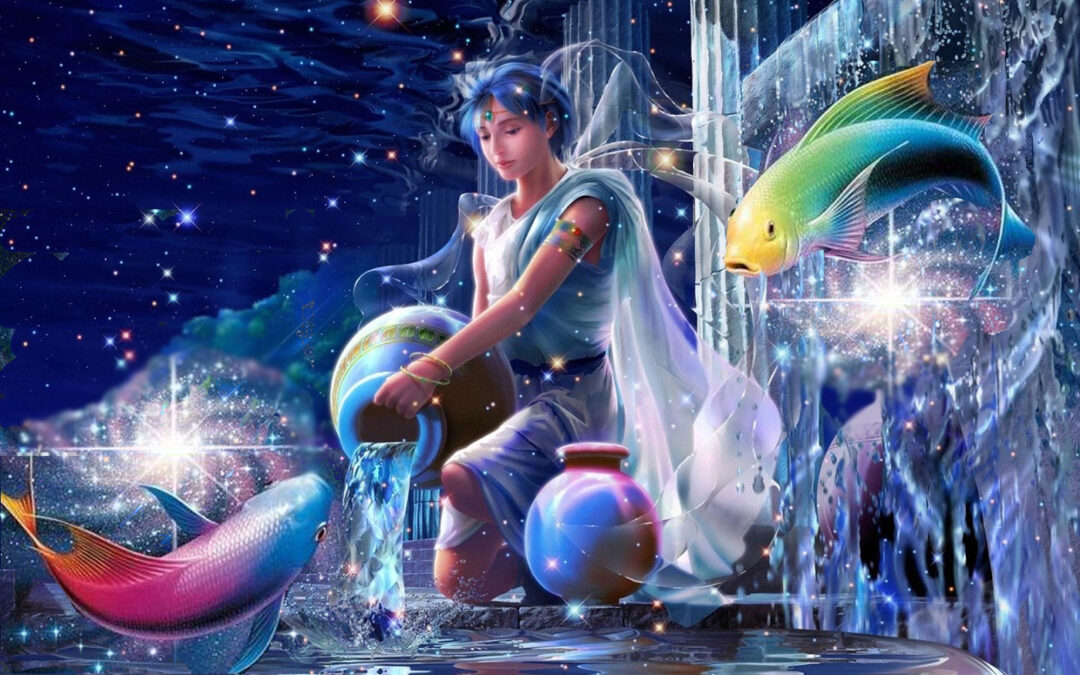 THE AGE OF AQUARIUS

“You never change things by fighting the existing reality. To change something build a new model that makes the existing model obsolete.” Buckminster Fuller

While there are differing opinions as to the exact onset of the Age of Aquarius, there can be no doubt that we are well into the transition between the outgoing Age of Pisces (along with the outgoing Sixth Ray of Idealism and Devotion) and the incoming Age of Aquarius (along with the incoming Seventh Ray of Ceremonial Order, Ritual and Magic). Ages last approximately 2,100 years which is one reason why the transitions between them is a big deal. The prevailing energy of the outgoing sign and ray don’t want to give up their dominance to the inevitable incoming energy. We who volunteered to be part of this transition did so with the Soul-level understanding that this would not be an easy time to live through, but that we are willing to be in service by participating.

Pisces is a water sign; water is symbolic of the emotional nature. Aquarius is an air sign, symbolic of the intellectual nature. This tells us something of what we have been going through in 2020 – a seeming battle between emotions and reason. We see the attack on logic and reason through fake news, social media manipulation and so much technological intervention that it is difficult to know what to believe. Knowledge is ruled by Aquarius while Belief is ruled by Pisces. Yet, we have to start somewhere.

What to believe? Who to believe? Where to go for Truth? What a perfect way to introduce the Age of Aquarius. The Search for Truth has become something much more than what “seems” obvious by intellect or feeling. Instead of fighting what we think is, let’s create something better, together.

Everyone: As we shift into this season of Aquarius be aware of it being a small representation of the New Age.

Dynamic: A challenge on your resources eases by mid-month.

Direction: Look at the big picture.

Soul Thought: The devil is in the details.

Dynamic: Your challenge regarding acquisition of something begins mid-month.

Direction: If rancor comes your way, seek understanding before responding.

Soul Thought: Now is the time to obtain knowledge about feelings.

Dynamic: Quiet family and home time until the 20th when something challenges your values.

Direction: Head to the grindstone.

Soul Thought: When the gods clash.

Direction: Stay aware of how you can help.

Dynamic: Although the energy has shifted you still have some challenges to resolve.

Direction: Take time to breathe deeply, something we haven’t been able to do well for a while.

Soul Thought: Where the air is crisp and clean.

Dynamic: Your status and reputation can improve dramatically this month.

Direction: Not by ambition, but by being the best you can be.

Dynamic: By the 20th you may feel a strong urge to break out of a confining situation.

Direction: Try to balance the possibilities with the potential downsides.

Dynamic: Though challenges regarding abundance exist, you are in a good place now.

Direction: These challenges can strengthen you more.

Dynamic: As the world turns, you remain in the same space.

Direction: Since it is good space, it’s a good time for contemplation.

Soul Thought: What is the dot within the circle?

Direction: Now is the time to practice self-control.

Dynamic: The large group you worked with has whittled down some.

Direction: Time to work with some new folks, perhaps?

Soul Thought:  Or work in new ways. Or both.