THE IMPORTANCE OF SPRING EQUINOX, MARCH 2020 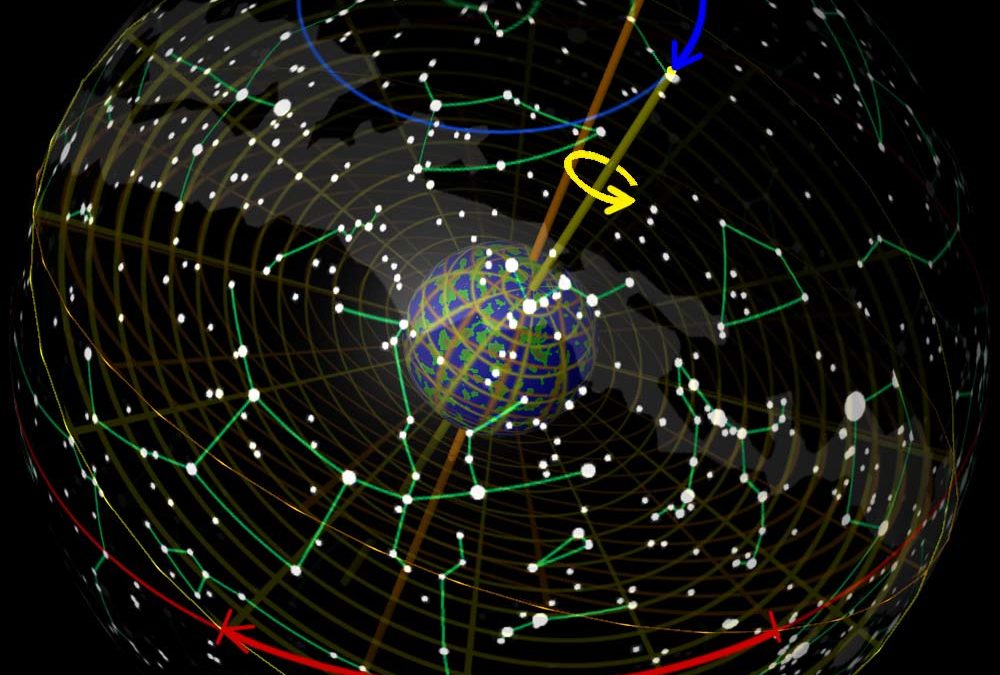 PRECESSION OF THE EQUINOXES

“The most beautiful thing in the Universe is the mystery.”
Einstein

This month we celebrate one of our two equinoxes, the Vernal or Spring Equinox. In the northern hemisphere, it marks the end of winter and the beginning of spring while it is the Autumnal Equinox in the southern hemisphere. This equinox also marks the end of our Zodiacal calendar with the sign of Pisces, and the beginning of the next year, starting with Aries. It generally occurs on either March 19, 20 or 21. One of the purposes of a leap year is to keep us from slipping too far behind each year, so once every four years our date is earlier than the previous year rather than slipping a few hours behind. This year it occurs in EST at 11:49 pm of the 19th.

Due to the 23 degree tilt of the Earth and the fact that Earth is not round and therefore wobbles as it rotates, the north and south poles describe a great circle over a period of some 25,000 plus years. An equinox occurs when the Sun is directly overhead the equator and its rotational axis is neither away from nor toward the Sun. Because of this gradual shifting of where the poles point, called an axial precession, this has led to what is also called the Precession of the Equinoxes. This precession is one of the reasons physical scientists (as opposed to metaphysical scientists) consider western astrology bunk. The point where the Sun crosses the celestial equator heading north is called the “First Point of Aries.” However, this point is now in the constellation of Pisces rather than Aries. Our metaphysical scientists however insist that our astrological system still works because we have been vibrating to this idea of Aries and the Vernal Equinox for so long. Rather than refute what either side has to say, the partnership of the physical and metaphysical sciences could enable all kinds of new work. Energy follows thought.

Everyone: March 24 will be one of our best days to view Mercury low in the eastern sky just before sunrise, and Venus in the western sky after sunset.

Dynamic: You dance from confusion to a moment of clarity and back again.
Direction: Enjoy the dance.
Soul Thought: Confusion can be the pause that refreshes.

Dynamic: It’s a time for absolution.
Direction: Ponder upon what you need to be released from.
Soul Thought: It’s internal.

Dynamic: You have a choice between debating and singing.
Direction: There is no wrong answer.
Soul Thought: Music makes the world go ‘round.

Dynamic: Sometimes it’s just fine to lay low and stay out of the fray.
Direction: Ask any crab.
Soul Thought: Or, be the Observer.

Dynamic: It’s a time for starting over.
Direction: Hopefully on a higher level than the last cycle.
Soul Thought: What is a spiral?

Dynamic: Two different groups capture your attention now.
Direction: Their energy can assist with your will to dive within.
Soul Thought: “When we use the word “can’t” we deny the Christ within.” Leonardo de Vinci

Dynamic: This energy challenges your sense of balance and determination.
Direction: Sometimes we try extremes before getting to center.
Soul Thought: The Middle Way.

Dynamic: Two or more come together in an opportunity to work off karma.
Direction: Ponder, who are your karmic brothers and sisters?
Soul Thought: The Age of Brotherhood.

Dynamic: You’ve done all the research, gathered all the data.
Direction: Now put it to use.

Soul Thought: “I am awake.” Buddha

Dynamic: Partnerships are challenged on the ground level.
Direction: Raise them to a higher level.
Soul Thought: “The vitality of opposition is where things are fresh and dynamic.” John O’Donahue

Dynamic: Blessings abound while the attitude remains positive.
Direction: : Look for the reasons to be positive.
Soul Thought: You are the “U” in the Universe.

Dynamic: A tough start to the month might have you wallowing.
Direction: Put your feet down!
Soul Thought: When rocks seem to be everywhere, build foundations.